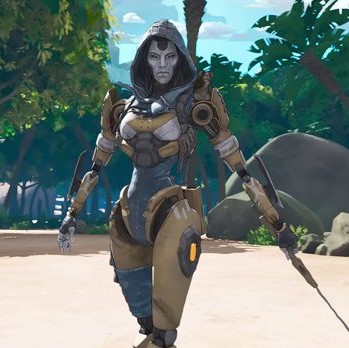 The new season’s gameplay trailer was posted and the gameplay of Apex Legends: Escape shows that Ash has new abilities.

The trailer shows Ash leaping into the fray and taking out several other legends with her sword-based finishers. It also shows her tossing out a sticky-bladed weapon that attaches itself to the ground and shoots out a tether, trapping another character in a restricted area. The opposing legend is still able to move, but only within a certain area and with decreased movement speed. Ash also demonstrated her ability to, in her words, “tear through reality,” causing her to travel through the void like Wraith and allowing her to reposition herself on another part of the battlefield.

The official Apex website gives more insight into these abilities. The bladed weapon is known as Arc Snare and functions as Ash’s tactical ability. It damages and tethers the first enemy that gets too close to its position. The portal was her ultimate ability, Phase Breach, which allows her to cut a one-way path to another point within a short distance. Not shown in the trailer was her passive ability, Marked For Death, which allows her to see the location of recent death boxes and surviving attackers on her map.

The trailer also revealed a variety of new information, including the new map Storm Point and its features, a look at the C.A.R. SMG in action, and a variety of new skins for heroes like Caustic, Revenant, and Mirage. The new season launches on Nov. 2.