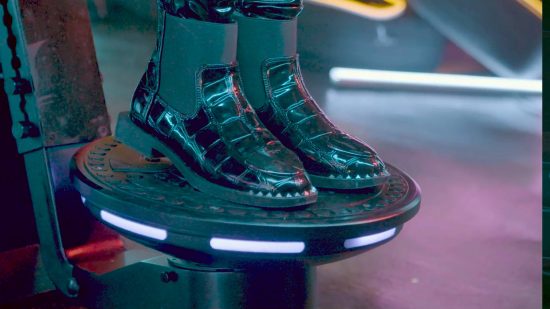 Moving around in virtual reality might be distracting, but a new gaming chair could help you run around while sitting in Oculus Quest 2 games. The seat, dubbed the SitWalk VR Controller, has a disc that you can move with your feet, eliminating the need for joysticks or leaping around your living room.

Over on Kickstarter, the Oculus Quest 2 compatible gaming chair promises to boost immersion while using the best VR headsets. It’ll supposedly achieve this by adding locomotive controls to the chair’s base, almost like a big d-pad for your tootsies. Spinning on the seat acts as in-game 360 degrees movement, so you won’t need to deal with any weird tank controls like in those old Resident Evil games.

The company behind the contraption, Vaxis Inc, says it’ll “reduces motion sickness and space limitations,” two factors that could be a virtual reality barrier. A demonstration video uses Half-Life: Alyx to demonstrate the chair’s abilities, but without trying it for ourselves, it’s hard to tell whether it’s an effective solution.

It’s worth noting that the Sitwalk VR controller is a crowdfunded project, so there’s no guarantee it’ll make it to market. The chair also comes at a premium price, and the $999 USD ‘standard edition’ doesn’t actually include the seat part. For the whole package, you’d need to pick up the ‘premium edition’, which comes in at an eye-watering $1,499 USD with an early adopter discount applied.

The SitWalk VR Controller joins a group of VR accessories that are trying to solve moving in cyberspace, including these chonky boots and a rather large treadmill. Compared to the latter, a controller seat is perhaps slightly more conventional, even if the end result resembles the Space Jockey from Alien.