What XL Patrik had to say About the Recent Roster Change 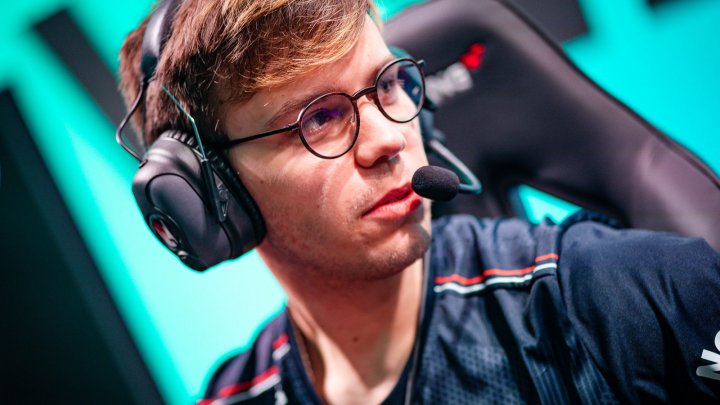 On and off the Rift, Week 3 of the LEC 2022 Spring Season saw a lot of action. Excel Esports had a lot of people watching them. Prior to the games, it was announced that former G2 Esports support Mihael “Mikyx” Mehle had joined Excel and would take over as the starting support from Henk “Advienne” Reijenga. With Excel finishing 1-1, there will be enough to do in the coming weeks.

Thank you so much for accepting this interview, Patrik. Congratulations on winning your last match and Excel now sits at 3-4, joint sixth. Talk to me a little bit about your reflections on the week with Excel going 1-1 against MAD Lions and Astralis?

Patrik: Pardon my voice, I’m a little bit ill at the moment. I think this week with Mikyx coming in, we’ve had really good scrim results. I think on stage we are still a little bit scared however, especially in the MAD Lions game. We didn’t look for fights when we should have looked for them and we didn’t take them at all, so that game was a bit rough.

The game against Astralis was better, I think we were more confident playing our draft. So yeah, overall pretty good week, but still need to improve for Barons and Drakes for sure.

I will ask you about Mikyx a little bit later down the line, and now that you mentioned Baron, it’s something I’d like to touch on. This week especially, Excel has flipped it at Baron continuously. Why does Excel have this tendency at the moment?

Patrik: I think we start Baron when something good happens for us on the map, maybe we chunk someone or we just get a really good position and then with a Veigar in the team, we had the idea to burst the Baron down together with Smite but somehow they still stole it. So, I think for now, we start Baron a lot because we don’t know any better.

Maybe after we focus on it next week we will be able to base and push some waves and look for a new Baron setup, but we are for sure starting it way too fast and not looking for a fight but just like pure 50/50. That’s not good.

That’s fair enough. On what you mentioned previously on Veigar, I believe Excel are the only team in the LEC at the moment that has picked Veigar, twice in a row. I understand in soloqueue it’s been rising up as well due to the buffs. Talk to me a little bit about what you think makes Veigar so strong and do you think we will see it be a staple competitive pick in the future?

Patrik: I think Veigar is just a very unique champion and with the buffs that he got, Veigar can stack his AP to a much higher number more quickly. So when the mid-game comes around and he has like 600 AP on two items, he’s just very strong. I think he will not be a first phase pick, ever. Veigar is a second phase pick if you know the matchups are good and you can farm, but I think it’s for sure a good playable champion.

As you mentioned, it’s a playable champion and I also understand some people have been trying to make Veigar bot lane work. Will we see you try or play Veigar bot anytime soon?

Patrik: Veigar bot… I think that’s pretty bad. Because in this meta where there’s Caitlyn and Jinx, and maybe even Senna, they will just push you in the whole game and hit your turret. So I think unless the meta changes a little bit to Ezreal or Kai’Sa being more prominent, where Veigar can win the lane, he will not be played in the bot lane. I’ll make sure to keep an eye on it.

Let’s see what happens then. Now for the questions I was going to ask you: You mentioned Mikyx, and Mikyx has of course been the talk of the community with him coming in so suddenly. As I understand it, it was a very abrupt decision. How did you and the team take the news that Mikyx was coming in to replace Advienne?

Patrik: To be honest, I think we were all quite disappointed. For everyone joining this roster, we just thought that this is the roster and there will be no changes. Yeah, the change was made by the upper management, so there’s just not much we can do about it, right? We have to just keep going. I think a lot of people, especially me and Mark “Markoon” van Woensel, were a little bit disappointed.

Thank you for being so open with me on that. Speaking of Mikyx coming in and you mentioned scrim results getting better as well, I’d like to ask how has your synergy been with Mikyx so far, and how is he adjusting to the team?

Patrik: I think he’s adjusting well. When it comes to bot lane, we’ve had decent success this week in scrims. On stage, it wasn’t too good versus MAD Lions, but there was some unlucky level one stuff. So yeah, I think we’re pretty good at the moment and we talk a lot. I think we’re not quite there yet when it comes to jungle/support synergy but you know, we’ve only played together like 20 games or so. We still need more time together.

I’d like to get your thoughts very quickly on what’s the biggest differences so far playing with Mikyx compared to Advienne?

Patrik: I think Advienne talks a bit more in game. He’s more active in voice comms than Mikyx. I think for Mikyx, he has a much bigger champion pool. He’s just simply more confident, in general. So I think that’s the biggest difference right now that I can see.

We’re coming to the end of the interview. Next week Excel will play both Rogue and Fnatic. On paper, it’s going to be quite a difficult week for Excel. What do you think of the two matchups ahead of you and which one are you looking most forward to playing?

Patrik: I’m looking forward to playing Fnatic a bit more because, you know, they’re just a crazy team that does crazy things and those games are pretty fun. For Rogue, they’re a little bit more stable I guess, although Malrang has been a bit crazy as well, so it will be fun too. I think both games will be hard, but I think it’s doable. We can for sure win against both teams.