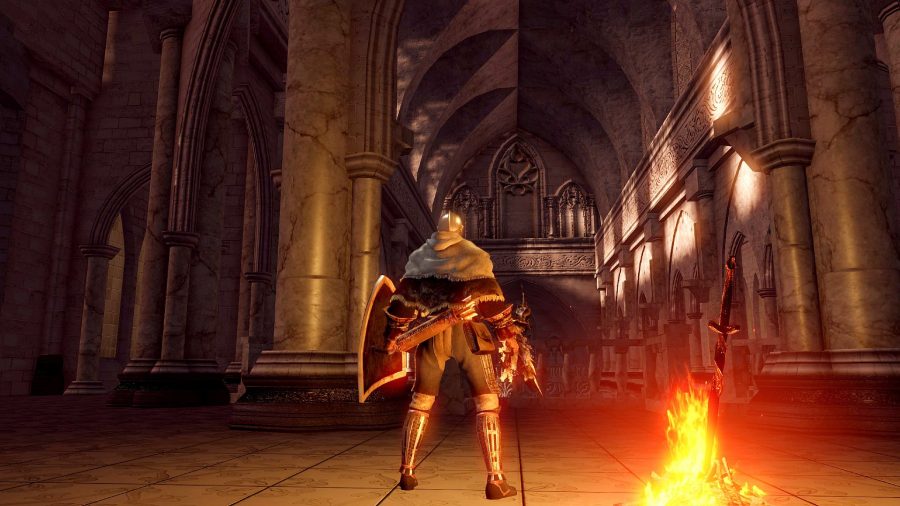 One of Dark Souls’ show-stopping moments is arriving at Anor Londo. I’m carried up by a trio of gangly, winged demons after defeating the Iron Golem, and deposited on a parapet with a stunning sunset view of the city. A gleaming hillside metropolis stretches out before me, with carved marble and gold towers and flying buttresses piercing the skyline. Following the degradation and filth of the locations I’ve visited – Undead Burg, the Depths, Blighttown, and Sen’s Fortress – I feel as though I’ve arrived to a prestigious dinner party, grossly underdressed, coated in dirt, and wheezing.

After finding my way to the area’s first bonfire, I step back out onto the high wall to get my bearings. It takes a little while to get over the sheer grandeur of the view, but as I venture forward, I notice something: Anor Londo isn’t designed for humans, at least not primarily. This place is built on a much larger scale: a chapel housing a gigantic painting soars to dizzying heights, while the main stairway up to the imposing central structure has steps that any normal-sized person would struggle to climb. It’s a city for giants.

My ultimate goal in Anor Londo is dead ahead of me, in a straight-line path up to the doors of the ornate cathedral in the distance. I’m going the long way around, though, because someone forgot to reset the rotating pillar that holds the bridge up.

Orange soapstone messages from other players who’ve already been through guide me to a ledge set down and to the side of the city’s main thoroughfare, where a flying buttress joins the bridge I’m standing on to the clerestory above. Here, I can enter the chapel through a broken window and clamber across the rafters to the other end of the nave, where there are ladders down to street level.

Clambering up to the church’s topmost level feels like breaking some golden game rule: what, you mean I have to walk on a path that isn’t clearly marked and flat? Surely not! But that’s the only way through this section, and it’s nothing compared to the section that’s to come. Once I’ve raised the bridge, I can approach the main cathedral – but the heavily guarded gate is locked tight and I’m forced out onto yet more flying buttresses, where I’m beset by demons and fired on by silver knight archers with great bows that are taller than me – if one of these harpoon-like arrows hits me then I’m tumbling straight to my death.

ANOR LONDO IS A BEAUTIFUL, IMPRESSIVE PLACE, BUT IT FEELS UNFINISHED

This is one of the most legendarily infamous sections of pure bullshit in the whole Dark Souls series. Eventually, after sprinting and rolling through a gauntlet of insta-kill arrows, I reach a ledge hugging the wall of the cathedral. This is the worst bit. Here, I face one silver knight head on, while the other fires at me from behind. Once I’m close, he draws a sword and shield and does his level best to keep me from getting around the corner he’s guarding. This all takes place on a ledge that’s less than a metre wide.

There’s no room for error, but even when I do everything right I get butchered. Sometimes I’m impaled by an arrow from the other silver knight archer, or I mistime a roll, or I get staggered by a heavy blow from the first archer and subsequently killed by the second. Back to the bonfire to run the entire length of the zone again – rinse and repeat until, by some miracle, the big bad knight puts a foot wrong while trying to brain me and plummets to his death.

When that happens, it feels like something’s broken, that I’ve somehow snuck through a gap in the game’s rules. I don’t mind – I make my way around the corner, drop down to a nearby balcony, and open a fog door leading inside. There’s a bonfire waiting for me just a few doors down the long marble hallway ahead, along with my old pal Solaire.

Anor Londo is a beautiful, impressive place, but it also feels unfinished. There’s an awful lot of unused space, and many of the rooms inside the cathedral feel haphazardly dressed. There’s plenty of valuable loot to find and even some interesting scraps of lore, but there’s an odd, empty feeling to the whole place. Parts of Anor Londo look and feel like the greybox versions of the level were given textures and sent on their way. Up close, I can see where the veneer peels away, revealing the cheap plywood set pieces holding everything up.

The wide-angle view, however, is awesome. The view of the sun setting over the city from the beginning of the area, where the demons dropped me off, is one of those videogame vistas I know I won’t forget – it’s breathtaking. That’s also a good word for describing the boss fight I’m about to head into, as it happens. Dragon Slayer Ornstein and Executioner Smough are about to make me stop breathing several dozen times, in fact.

This is it, the fight everything has been leading up to. There are plenty of boss fights to come, sure, but Ornstein and Smough are Dark Souls’ real showpiece battle.

Once I’ve made my way through the cathedral and unlocked all the doors in the residence, it’s a quick shot from the bonfire to the grand entrance hallway that leads to Ornstein and Smough. They’re set up in the cathedral’s chancel, and they charge at me as I pass through the fog door: the lithe Ornstein darts towards me with his lance as Smough lumbers up from behind, ready to deliver a punishing blow with his mighty brass hammer.

This is Dark Souls’ midterm exam. Everything I’ve learned about stamina management, dodging, and split-second camera control come into sharp focus during this fight. It feels like I’m wearing a groove into the path from the bonfire to the arena: every night, I wake up to see Solaire keeping warm by the fire, practice my shield parries on two unavoidable silver knights along the way, and then get pummelled to death by the Abbott and Costello of pain.

The fight feels insurmountable in my first handful of attempts. I can’t read what’s happening, and I don’t know what kinds of moves these two intimidating armoured giants are going to throw at me. Do I focus on one, both, or none? How do I heal when one of them is always about to attack me? A few times, it feels as though I’m demolished before I even have a chance to act. But with each attempt, that changes.

THE BATTLE WITH ORNSTEIN AND SMOUGH CEMENTS AN IMPORTANT PRINCIPLE OF DARK SOULS: KNOWLEDGE IS POWER

Patterns reveal themselves. I can dash behind a broken pillar to quaff an estus potion, and roll towards my enemies during some of their seemingly unavoidable attacks to get in some punishment of my own. I learn how far I can push it before I need to back off to avoid being trapped and skewered (or flattened, if Smough’s on the scene). I learn to be intentional about my use of the lock-on camera, and careful when turning my back on the duo.

Every night I give myself an hour to run the boss fight. My first attempt is usually a warm-up, in which I get a few hits in on Ornstein before making a poor positioning choice and getting walloped by a combo I can’t recover from. Each night, though, I get one ‘good’ run: everything will go my way, and I’ll see the pieces sliding into place before me. It’ll start well before I even reach Ornstein and Smough, with a perfect parry against the first silver knight, and end with me dispatching Ornstein and watching Smough absorb his fallen partner’s lightning powers and leaping at me. Every small triumph sees me get closer and closer to victory.

My winning run arrives early on a Saturday morning. I get out of bed early to enjoy a quiet cup of coffee and the view of our snow-covered yard, and I suddenly realise I want nothing more than to try the boss run just a couple more times while my wife and the dogs are still asleep. Dark Souls had successfully wormed its way into my brain.

The fight had stopped feeling unbeatable long ago – collapsing from a chaotic and terrifying dual assault down to a handful of understandable moves from each enemy. I know how to counter everything they throw at me, I just need to not screw up. And, eventually, I string it all together without any critical errors.

The battle with Ornstein and Smough cements an important principle of Dark Souls: knowledge is power. Understanding what’s coming, what both enemies have in their arsenal, and knowing where I can dart in to chip away at their huge health bars – all of that comes gradually, and it’s far more effective than any stat boost or weapon upgrade. Almost everything in Dark Souls is like this. The difficulty comes from not knowing, and filling in those gaps is the process that makes the seemingly impossible become, bit by bit, achievable.

Hands still vibrating from adrenaline, I head out of the demolished chancel and find a door to an upper level of the cathedral. There, I accept the Lordvessel from Princess Gwynevere, a giant woman in surprisingly comfortable repose. She tells me I’m to succeed her father, Lord Gwyn, and end the “eternal twilight” that’s been cast over the world of Lordran. The strange primordial serpent, Kingseeker Frampt, has more information for me back at Firelink Shrine.

This is a real inflection point in Dark Souls. So far, I’ve had to walk between bonfires, and that’s been an incredible exercise in constructing a mental map of the world. Now that I have the Lordvessel, I can teleport between areas where I’ve lit bonfires. It’s going to change the game in a profound way – something I’ll discover first-hand very soon.