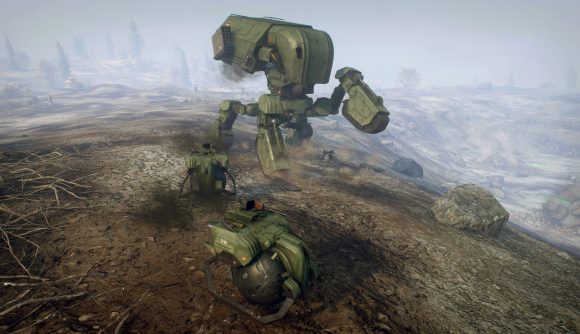 As Generation Zero approaches its third birthday, the open-world survival game has gotten a fresh update. Since it’s the ’80s and this is basically a Swedish, mech-based version of Red Dawn, it was only a matter of time before the Soviets showed up – and now they have, in the form of two new machine types you’ll need to be watching for.

The free Landfall Update, which is available now on Steam, introduces the Soviets as a third faction in the deserted Swedish archipelago of Generation Zero. The two new machines they’ve sent over are indiscriminate about targeting: they’ll go after you and the FNIX machines you’ve been fighting with equal enthusiasm.

The smaller of the two new machines is the Lynx, a ball-based mech that looks like an up-armoured version of BB-8. Its design allows it to traverse almost any kind of terrain, and it can be fearsome up close – so watch and make sure you’re not being surrounded when you spot a group of these. The larger machine is the Wolf, a spider-tank with treads on each of its four legs. There are three varieties of the Wolf, but they all can carry a payload of Lynx to deploy in battle, so come prepared for a serious fight.

The update also adds the long-awaited weapon wheel to Generation Zero, which means you will no longer be restricted to carrying three weapons at a time. You’ll also find that your storage containers can be upgraded further now, with five more levels for each one.

The latest patch includes some work to a few of Generation Zero’s areas, specifically the Southern Forest and Marshlands. In addition to the visual refresh and rework, both regions also have some new collectibles to discover, which can provide some insight into what’s brought the fearsome new Soviet machines to the area.

All owners of Generation Zero will receive a free base building pack of items when they log in, and there’s also a new premium DLC, the Base Defence Pack. It adds some new Resistance defensive items, like a grenade launcher pillbox, spiked floor traps, and a human decoy.