League of Legends’ Dragons Get Buffed Next Patch 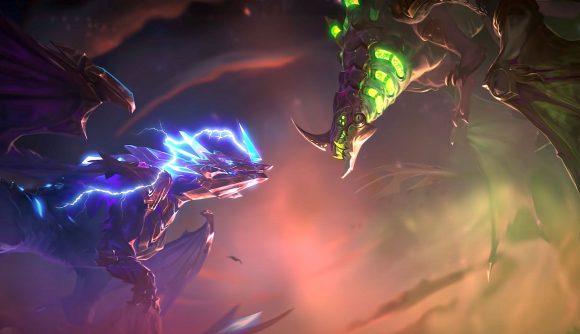 If you read our League of Legends patch 11.24 notes, you’ll know that Riot Games has given us a sneak peek at what to expect in terms of balance changes for the first major rebalancing patch of the Preseason in 2022. While no specifics on particular improvements have been revealed, we do know that a scattering of balance updates are on the way — and League of Legends’ new Chemtech and Hextech dragons are on the list for some benefits.

Developer Riot Phlox has posted the early 11.24 patch preview on Twitter (below), revealing that the two dragons – which came to League of Legends as part of its big new batch of Preseason 2022 changes and content – are getting some TLC. It’s not clear exactly how much Riot will be dialing up their prowess on the Rift, but it looks like the changes won’t be major, with the early preview noting the changes as a “Chemtech mini dragon buff” and “Hextech mini dragon buff”, respectively.

It looks like the changes coming up will be balanced out to an extent by a nerf coming to the Chemtech dragon’s soul, though. This soul gives your champion a buff in the form of a brief second life if they die, being able to revive where they’re stood and make use of their auto-attack and abilities before dropping.

It’s not clear yet how this feature will be nerfed, given it has a pretty absolute gameplay effect, but we shouldn’t have to wait long to find out. The early patch previews typically land on Twitter a day or so before the more detailed rundowns get posted, at which point the changes hit the testing servers, so we should get an idea of the Chemtech and Hextech drake changes very soon.

There’s been some chatter in the MOBA game’s community about the role the new dragons and their souls have been playing as part of League’s meta since their recent arrival, with some mixed feelings about whether they’re fine as-is or need a little rebalancing. However, with this being the first big pass on balancing since the Preseason 2022 content came to the live game, it’s to be expected that the new additions will need a little fine-tuning as a follow-up. Hopefully, these changes will help get the dragons in just the right spot for when 11.24 goes live.

Elsewhere in the early patch preview, Riot’s detailed some direct buffs and nerfs coming to Ivern and Camille, respectively, along with some other tinkerings for the game’s systems. You can check these out above, and keep an eye on our patch notes to see the changes in detail soon – when they hit the PBE, we’ll pop everything you need to know in there.