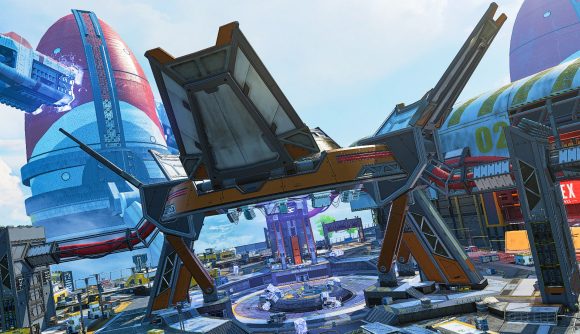 When the next season of Apex Legends arrives, Olympus will be in worse shape. After a scuffle nearly sent the floating landmass tumbling down to earth, Mad Maggie and Eduardo Silva have put it through the wringer. This storey, on the other hand, fits very nicely with Respawn Entertainment’s choice to make some much-needed design changes to Olympus.

Level designer Alex Garner explains during a recent panel with the press that the round design of the map was sending too many players towards the centre for combat. Now, when you next touch down in Olympus, you’ll find that the south portion of the map has been expanded to tempt you away from Labs and Estates, which the team hopes will reduce the frequency of spontaneous third-party encounters.

The south side of the map is now the home of the phase driver you’ll recognise from a recent trailer. More than a towering structure, the new point of interest can lead to some good loot if you risk switching it on. Doing so will guarantee one gold-tier reward, though you can only activate it once every 45 seconds. The phase driver is also pretty dang loud, so be sure that everyone will know where you are if you switch it on.The best police games on PC | PCGamesN

The team also explains that several locations had to be shifted to allow the phase driver to connect to the runner, so existing areas like Solar Array’s, Icarus’, and Bonsai’s platforms have been pushed away from the centre of the map to allow for a new slice of land that hosts the phase driver.

You’ve also got another point of interest called Terminal. It’s an opening in the phase runner tube – don’t worry, it still works fine – that has five entrances and various raised platforms. Garner explains that it’s designed to connect Labs to Bonsai, giving players better rotation options on the map if they want to dip from a fight.

There’s plenty more coming next season, too. Game designer Mark Yampolsky explains that Control is designed to be a casual offering for players as the team noticed that some felt that even non-ranked queues felt quite intense. The team is keeping it as a limited-time mode for now, though that could change depending on its popularity.

Game designer David Swieczko adds that you’ll be able to swap your legends and loadouts between deaths and that you’ll be able to find new gear through timed events such as drops. If you want to upgrade your weapon, you’ll want to work on your score as it’s through the fan-rating system that you’ll take your gun up a level. If you die, though, it’ll fall to the floor – so be careful.

We also got word on a few balance changes that are on the way. Live balance designer John Larson explains that Caustic’s Nox Gas Traps will be destructible after they’ve been triggered and that Crypto is getting surveillance drone HUD improvements and a throwable drone to make him a more enticing pick.

Looking further ahead, the team is aware that the Evo-8 is a tad weak following its latest nerf and that Gibby is basically an essential pick, though there are no changes to share on those just yet.