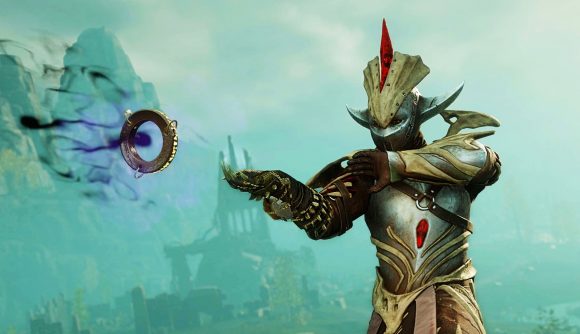 New World developer, Amazon Games said earlier this week that it will be releasing a “one-time reset of the faction change cooldown for everyone” to assist alleviate some faction imbalance and handle issues with players “in a terrible state with their faction reset timeframe.” The studio has now released update 1.2.1, which includes this reset as well as a slew of other tweaks and changes.

“To enable a level playing field for players, we reset the faction cooldown time for all players,” the devs explain in the patch notes for today’s update, which also clarifies the duration of the cooldown timer when players have chosen or changed their faction going forward, which will “be set to 60 days”. In their initial post earlier this week, the devs said that they’re “hopeful the reset will allow sets with lower populations post-merge to use game modes such as war and PVP while we work toward a better solution for how to get them to a more populated world”.

Elsewhere, the handful of changes introduced in today’s update look to address issues that have cropped up following the MMORPG’s hefty December update.

The devs have restricted coin lockboxes that players can earn from settlements’ Trees of Light to those at level 15 and higher, for example, to coincide with when Event Quests are enabled for players. “This change was implemented to discourage bad actors from repeatedly creating new characters in an attempt to exploit the availability of coin,” the devs explain.

Elsewhere, the number of characters you can create per day has been dropped (though the exact new number isn’t stipulated), and there are bug fixes for issues that were causing Azoth balances not to update properly after crafting or fast traveling, and potions to “drop at multiple gear scores resulting in inventory stacking issues”. Which sounds like a pain, so it’s good news they’ve been stomped out.

To catch the full rundown of changes with the update, you can head to Amazon’s notes at that link. For pointers on the best New World gear, New World’s fishing hotspots, and what’s on with the New World Winter Convergence festival, you know where to click.