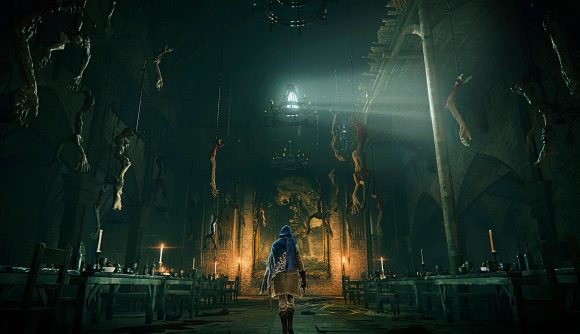 An exploit that allowed griefers to transfer others to particular map positions has been patched in a new Elden Ring patch. Because FromSoftware has already conducted maintenance on the update, it is already available for download on both PC and consoles. Bandai Namco also says that you’ll need to install the patch in order to play online.

Elden Ring patch 1.03.2 – if we’re using the proper name – follows a story of griefers invading others to crash their game over the past week. Essentially, someone would join your game under the guise of wanting to do some PvP. People then reported that their game would crash and that they would be stuck in an infinite falling death loop when logging back into their game. Bandai Namco hasn’t confirmed what the fix means for players who have had their saves ruined, though it should hopefully prevent others from suffering a similar fate.

Fortunately, some people found a workaround for the exploit last week. Before you die, you could hit alt and F4 to quit the game. That would give you some more time when logging back in that you could use to open the map and teleport to a Site of Grace.

Elsewhere in the new Elden Ring patch, you’ve got a fix for a bug that could prevent you from advancing NPC Nepheli Loux’s questline and another that was causing players to die when trying to descend from a spot near Bestial Sanctum. You can read the full patch notes here.

If you’re looking for some help with FromSoftware’s latest, check out our Elden Ring bosses and Elden Ring classes guides.