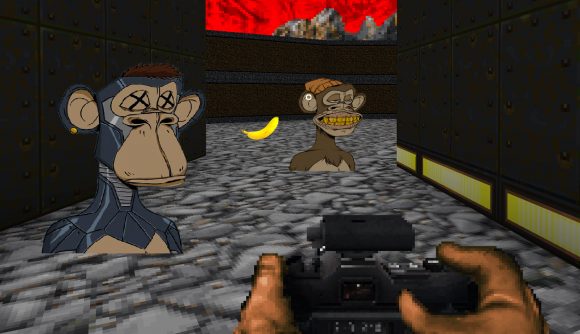 It’s safe to say that most people who aren’t affiliated with Ubisoft dislike NFTs. The good news is that modders have the ideal solution to any NFT annoyances: kill them in Doom and make as much money as possible while doing so.

NFTs are all the rage these days, and it’s mostly rage directed against them. The Game Awards outright banned them along with discussion about them, and Valve has put the hammer down about having them on Steam along with any “applications built on blockchain technology”. In the shooter space, any plans for STALKER 2 to have NFTs have been canceled – but Ubisoft is still barrelling ahead with them into Ghost Recon Breakpoint.

Players need an outlet to express their rage, and as usual, Doom is the perfect place. The first version of the Doom NFT mod by Ultra Boi is out now on ModDB and it replaces all the enemies in the game with various different types of bored NFT monkey art.

Armed only with a camera, players have to take pictures of the NFT monkeys to get as much money as possible, but be careful, because these monkeys don’t like to be screenshotted. You can check out the satire (?) below, along with the meme that partly inspired it.

As it turns out, Doom is a pretty good place for satire. This mod brings in the GTA Trilogy Definitive Edition’s awful rain, for example.