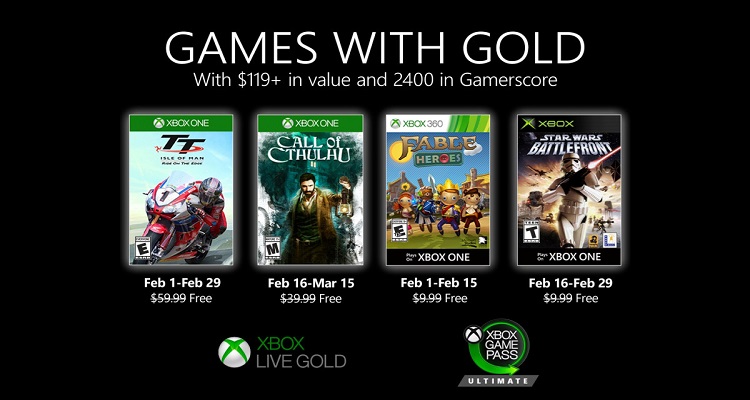 The New Lineup Has Been Announced

Microsoft has recently announced the new lineup for February and they include, somehow, good titles. First of all you have to be an Xbox Live Gold subscriber to be able to download and enjoy those new titles and the old ones of course.

Starting on February 1, TT Isle of Man and Fable Heroes will be free with the subscription. Then, on February 16, Call of Cthulhu and Star Wars: Battlefront can be downloaded at no cost.

So let’s start giving a brief description of every game announced.

“For bikers, there are two types of speed races: the Isle of Man TT and the rest. No race is more difficult. Take up the challenge of the legendary Snaefell Mountain course.”

“Fable Heroes is a fresh spin on the beloved Fable franchise in which up to four players play both cooperatively and competitively in this hack-and-slash adventure. Work together as heroes of Albion to defeat familiar foes and new enemies while collecting as many gold coins as possible to unlock upgrades, characters, and more.”

“Private Investigator Pierce is sent to look into the tragic death of the Hawkins family. Plunge into a world of creeping madness and cosmic horror. Cryptic clues, shadowy figures, and pure terror bar your way as you fight to retain your sanity and solve an otherworldly mystery.”

“Fight on the front lines where every weapon and vehicle is yours. And now for the first time, Star Wars Battlefront II lets you. Fight as a Jedi. Earn the ability to wield a lightsaber and use Force powers like Yoda, Darth Vader, and many other Heroes and Villains. Battle in Space in X-wings, TIE fighters, Jedi Starfighters, and other classic starships, or land your ship on a Star Destroyer and fight it out on foot aboard enemy ships.”

The impending release of February’s games means you only have a few days left to claim the ones from January, including Styx: Shards of Darkness and Lego Star Wars 2. The other January game, Batman: The Telltale Series, will stick around until February 15.

Xbox Games With Gold for February 2020

Also a reminder: the Gold subscription, which enables online play, also includes the monthly Games with Gold library.
Gold is also included with Game Pass Ultimate, which gives you a much larger subscription-based library on both Xbox One and PC.